Looking back, it all began when my seven-year-old twin sons were able to read "phonetically controlled" readers with words such as cat, sat, hit, and sit, but could not read real books with words such as is, has, have, and give. No matter how many times we drilled the sight words, or I told them "that is an exception," they continued to use the sounds they had been taught and to misread these common words and hundreds of additional words.

This surprised me because my boys loved books! Since their birth, I read to them every day. We checked out laundry baskets full of books from the library, and they loved audiobooks. Yet when they tried to read aloud to me, it always ended with tears of frustration. Both boys, who still loved stories and learning, hated reading.

Until this point, I thought English was a language riddled with exceptions and that children learned to read by being surrounded by books, developing a love of reading, using phonics as one of many tools, memorizing sight words, and talking about words. I thought that eventually, with the right conditions, the magic of reading would happen, just like they learned to speak.

I was confused. I was worried about the boys. I began to read everything I could find about reading instruction and reading disabilities. During that time, I stumbled upon the Orton phonograms and spelling rules. I quickly understood that despite my background in teaching English as a second language and my graduate work in curriculum and instruction, my knowledge of English phonics at that point was oversimplified and limited. I also understood that many phonics programs, including the one my boys had used to learn to read, were incomplete, with huge gaps that were creating unnecessary exceptions.

For example, I had been taught that S says /s/ as in sad. I did not know that S also says /z/ as in is, his, and chairs. I knew that a silent final E makes the vowel say its name as in lake, hope, and pine. But I had no idea there are actually nine different reasons that a silent final E may be used. I did not know that English words do not end in V, or that a silent E is always added after a V at the end of the word as in have, give, and mauve. I had no idea there are 75 phonograms in English and 31 spelling rules that accurately explain 98% of English words.

As I was learning answers to my own long-forgotten questions about English, I started to teach my sons. I explained to them that the letter S actually says TWO sounds, /s/ and /z/. Words they had been misreading for years, such as is, his, and has, instantly became easy for them. After I taught them all the reasons for a silent final E, I was no longer saying "that is an exception" or "that is a sight word" when they misread a silent E word like have or large. Rather, I now asked them, "What is another reason the E may be in this word?" They would pause, look at the word, read it correctly, and go on enjoying the text.

Over the course of a few months, we learned the phonograms and rules and applied them to words through spelling. During this time, something magical finally did happen! Both boys began to love reading! And not only that, they could read at the same level as the audiobooks they had been listening to. They began to consume whole series of chapter books such as The Chronicles of Narnia, Warrior, and Redwall.

Because they had been listening to audiobooks and I had been reading aloud to them, once their phonics knowledge caught up with their listening ability, they were able to read and comprehend at the same level that they could listen and comprehend. This is consistent with the current reading research; the Simple View of Reading states that Reading Comprehension = Decoding Skills x Listening Comprehension Skills.

At the same time, my life was changed! Despite being an avid reader who had graduated from college, been an ELL teacher, and completed graduate work in Curriculum and Instruction, I had always struggled deeply with spelling. As I taught the phonograms and spelling to my sons, I learned how to spell!

I was now on a mission. I wanted to share what I learned with everyone! So I put together a one-hour presentation of my favorite phonograms and spelling rules. I called it "The Logic of English." I gave this presentation at private schools and homeschool conferences.

At these events, without knowing any of the literacy statistics, I put my hand on the heartbeat of the literacy crisis. Each time I spoke, people shared stories about their pain and struggle with reading. They told me about their broken dreams, lost hopes, and feelings that there was something wrong with them. They shared about their family members' struggles. They told me how the presentation brought them renewed hope and how learning a few of the phonograms and spelling rules changed their perspective about words. They shared their new understandings of how people learn to read and spell and their renewed hope to learn.

During these talks, teachers would also come forward to share how they had not learned this knowledge in their schools of education or professional development programs. Teachers would tell me their new favorite phonograms or rules and how this information had transformed their own understanding of words. Teacher after teacher told me they believed this information had the potential to transform education.

In October of 2010, our family founded Pedia Learning. (We later changed the name to Logic of English to match our products.) In January of 2011, we published our first book, Uncovering the Logic of English.

Despite the fact that the whole business was located in my basement and we had only published one book, it soon gained the attention of some influential people in education. Temple Grandin endorsed the book. I was invited to keynote at the San Diego Public Library Association and Literacy How. Dr. Robert Sweet, director of the National Right to Read Foundation, wrote a book review. He became my mentor and until his passing in 2019, we communicated many times a week through email, phone, and text.

Dr. Sweet impressed upon me that teachers and parents needed more than knowledge; they needed curriculum. He challenged me to lay out the concepts taught in Uncovering the Logic of English in lessons that could be taught without attending days or weeks of training. I decided to accept his challenge and give it a try. I knew as I began that I wanted to create a program to empower older struggling readers and spellers, one that didn't feel babyish but presented the powerful discoveries that had changed our lives. After many, many long nights at the computer, I finished the first edition of Essentials. 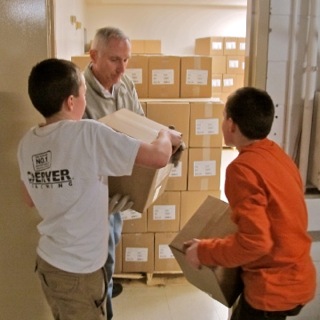 In those early years, three generations worked together writing and editing books and curriculum, recording videos, creating a website, traveling to conferences, and developing accounting systems. It was quite a whirlwind.

While I was writing Essentials, I began to think about how inaccurate children's ABC books were. They left out sounds or even included inaccurate sounds. My children and I played with words and made up silly phrases together. A collection of whimsical sentences that used all the sounds began to take shape, and in 2013 a linguistically-accurate alphabet book, Doodling Dragons: An ABC Book of Sounds, went to the press.

Later that year, I received a call from a woman named Faith who served on the board of a private school. She said that her private classical school had adopted Essentials, but what they really needed was curriculum for their kindergarten and first-grade students. She asked if I would write it. I politely said no. Over the coming months, she called two more times. The third time, I finally said I would try, and I began writing what would become Foundations. Without Faith, Foundations would never have come to be!

While I was speaking at a conference, a state-level Emergency Management employee asked me to expand Essentials. He told me that struggles with spelling were a widespread problem in his field, and he suggested that professionals writing incident reports would benefit from learning how to spell and that an industry-specific program could save the state money. Our conversation inspired the expanded second edition of Essentials, a unique multi-level spelling, reading, and grammar program that includes additional levels of application to meet the needs of more advanced students. These lessons create the framework which we hope to one day build upon to create industry specific spelling programs. During this time, Kimber Iverson wrote The Essentials Reader, a phonics-controlled high-interest reader for older students adding the vital skills of reading comprehension and fluency to Essentials.

As our product line and our team grew, we rented the house next door. Our offices were upstairs, and the shipping department was in the walkout basement with convenient access to the driveway. Here we laid the groundwork for future growth by developing critical business systems, building a new webstore, and learning how to run a business and be a team. In between all the business activity, Dr. Christy Jones collaborated with us to complete the Essentials Reader Teacher's Guide and Student Activity Book so that Essentials now taught all the language arts skills!

We moved into our first commercial warehouse space in 2016. There we grew and grew; we published two more children's books, Knitting Knights and Whistling Whales, completed Essentials 16-30, and published Miles and Jax, an early chapter book that is both phonics-controlled and great children's literature! We collaborated with young artists from Southeastern Minnesota to create the Foundations B Young Artist Series and partnered with recording artist Jill Pearson on Doodling Dragons ABC Songs.

In November 2018, we moved into our current office and warehouse. Since our move, we continued to add to our creative team, developed an innovative online professional development course and released Rhythm of Handwriting Wall Strips, a new Game Book, and Whistling Whales Phonogram Songs.

In 2019 we also began rebuilding our website. This first stage provides detailed tours of our curriculum and free sample lessons for people to try out before purchasing. Throughout 2020 we will continue releasing new website pages about how to teach reading, spelling, phonemic awareness, systematic phonics, phonograms, handwriting and more! This free content is our contribution to making best practices for effective reading and spelling instruction available to everyone.

As we look ahead to our ten year anniversary in October of 2020, I want to thank each person who has been a part of this amazing journey! You are all part of a movement to ensure that everyone has the opportunity to learn to read, write, and spell!