As a culture we have been mistakenly led to believe that manuscript is easier for students to learn than cursive. By reserving cursive for third grade we have given a whole generation the false impression that cursive is the “adult” form of handwriting and printing is simpler. However, this is simply not the case.

At Logic of English we strongly recommend beginning with cursive. Cursive has six primary advantages over manuscript:

Let’s begin first by considering the motor skills needed for both forms of handwriting. Surprisingly, cursive is less fine-motor skill intensive than printing. Take a moment to write the word teacher in both print and cursive. Observe the motions of your fingers and the lifting of the pencil. With cursive the pencil is lifted only between words thereby requires less fine-motor movement. While printing the pencil must be picked up between letters creating more up and down motion and therefore more fine-motor movement. Cursive is actually less demanding of the hand than printing. This is because cursive was designed for the human hand whereas printing was designed for the printing press. 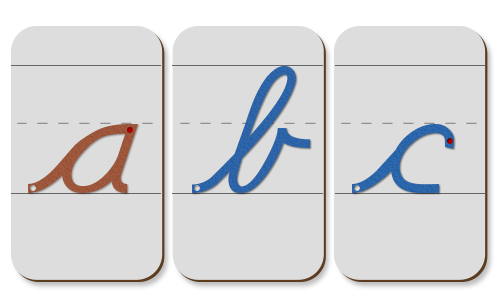 Now consider young children. Many four-, five-, and six-year-old students do not have well-developed fine-motor skills. By asking them to print first, we are actually asking them to perform the more difficult task. From the perspective of motor skills it is easier for children to begin with cursive.

Another area of great difficulty for young writers is the spacing of letters within words. While printing it is common for students to put too little space between words and too much space between letters within a word. Many of these students also struggle with knowing where words begin and end while reading. They will blend the final sounds of one word with the initial sounds of the next word, thereby demonstrating a confusion about the role of spaces in printed texts.  By teaching cursive, these problems resolve easily as students feel the motion of picking up their pencil between words (emphasizing the beginning and end of each word) and feel the connectedness of the letters within words (emphasizing how these phonograms are blended into one word).

Many students who begin by learning to print frequently reverse b’s and d’s and p’s and q’s in both reading and writing. This is due to their similarity in shape and the students’ lack of clarity about how to form the letters. Cursive handwriting makes letter reversals more difficult and helps to minimize this type of confusion. Notice the distinctions between a cursive b and d and the p and q. When students learn cursive first as well as clear directions for letter formation, reversals are minimized.

The generational problems of our current handwriting practices are readily apparent by surveying adults about their own handwriting. Most adults in the United States under the age of eighty mix print and cursive, even though they wish they could write in a beautiful, consistent script. Another significant percentage of adults write in only print. Based upon my informal surveys, speaking to thousands of people, less than 5% of adults write in cursive.

This is because handwriting requires highly developed muscle memory. When students are asked to switch from printing to cursive in second or third grade, they are unable to overcome the prior years of practice which developed the muscle memory for forming printed letters. Most people therefore blend cursive and print. Another significant percentage of students revert to printing as soon as they are allowed. These students typically struggled to develop the fine-motor memory necessary for printing. They often had poor handwriting and dreaded switching to cursive when they had barely mastered fluent printing. As soon as they are no longer required to use cursive, these students revert to the form of handwriting that is the most ingrained through practice: printing. Due to all the advantages of beginning with cursive and since it is a faster form of handwriting, it is far better to develop the lifelong muscle memory for cursive and later learn to print for specialized uses such as filling out applications. 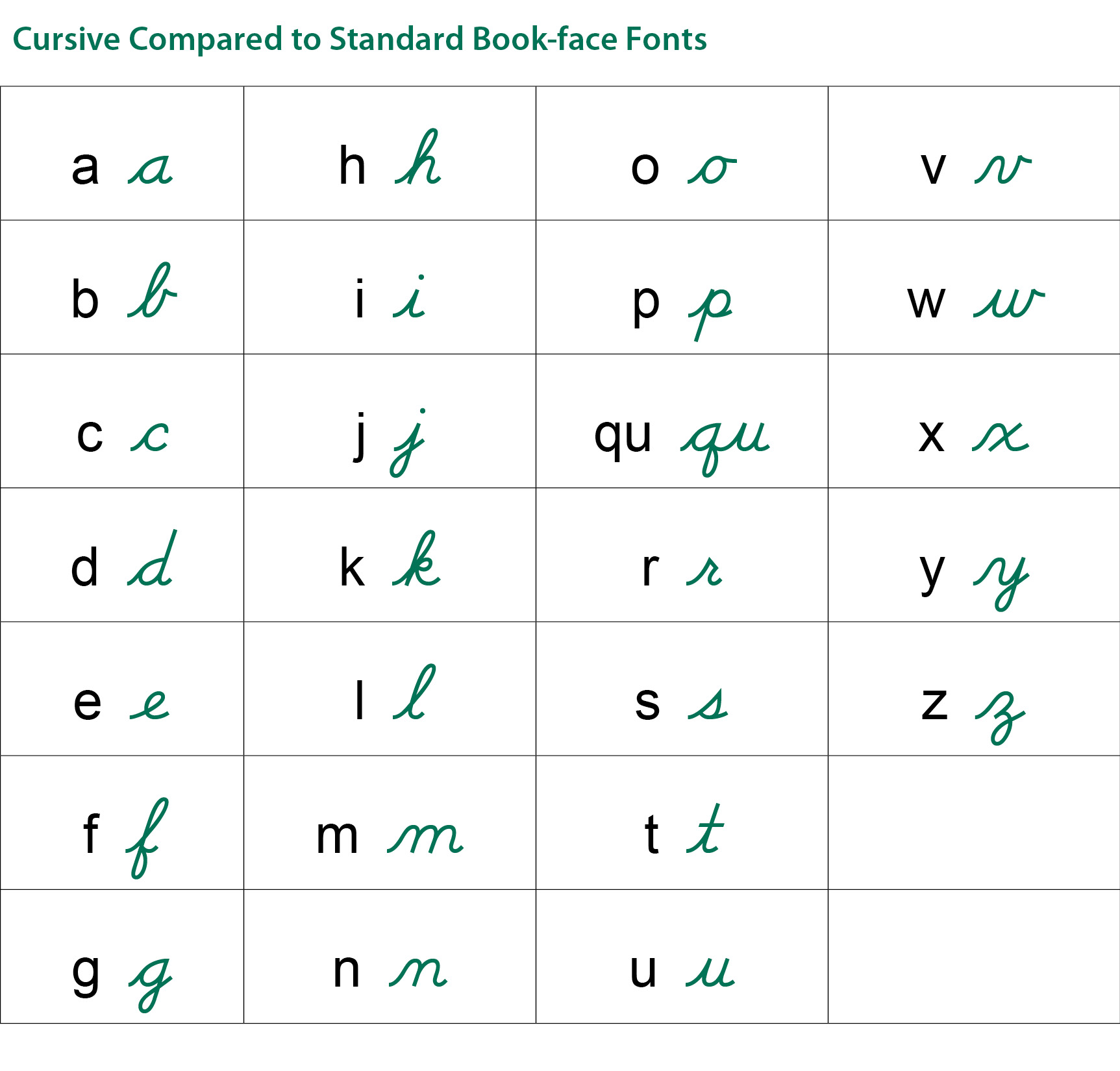 Although most schools in English speaking countries begin by teaching printing, most other cultures begin with the cursive form. In many non-English speaking countries, popular children’s books are even printed in both print and cursive. Historically, handwriting instruction began with cursive in America and Britain as well; it is only in the last hundred years that we have begun to do otherwise.

Many teachers and parents worry that if they teach cursive first to their students, they will not be able to recognize the letters in the standard fonts found in books. Students, though, do not struggle with this concept. Most of the standard book-face and cursive letters are closely related; the primary difference is that a connector stroke is added to cursive letters for ease in handwriting. In addition, the students already need to learn two forms of some of the lowercase letters. Compare all the different ways that fonts print lower case a, or all the different versions of g. At Logic of English we recommend that students be introduced to reading standard book-face fonts at the same time they learn to write in cursive. In this way students will learn the relationship between the two forms of written letters. Students can also play matching games with book-face and cursive letters in order to reinforce the relationship.

Teaching printing before cursive is one of the reasons for widespread underachievement in handwriting, spelling, and reading. For the reasons stated above, dyslexia and remedial reading centers around the United States recommend teaching cursive handwriting.

Although at Logic of English we believe it is important to begin by teaching students cursive, we understand that not all educators are ready to make the change. Therefore, all workbooks and handwriting supplements for Logic of English curriculum are available in both a cursive and a manuscript version.